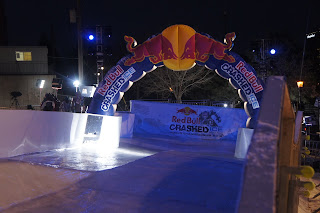 {EAV:23e03f780fcfbf88}
This past weekend in St Paul Minnesota, Red Bull decided to feature its new extreme sport they are trying make popular here in the states. Its called Crashed Ice. It's basically a steep luge track that instead of going down in a cart, competitors race down on ice skates and basic hockey pads. Down this nearly 5 story drop track, there is jumps, hair pin turns, moguls, and screaming fans. Speeds reached are near 40 mph.

I guess the origin of the sport goes back to Austria, when a local drunk snuck on to the local Luge track and skated down it. The rest is history. It is still trying to gain some popularity as there is only 3 more red Bull events for this around the world this year, and I believe there is only 2 permanent tracks in the World.

The event itself was cool. The track was sweet, and we got there super early, so we got a prime spot towards the finish line right on the wall. The down sides, no free red Bull. You would be sure that a event they were sponsoring, there would of been some free Red Bull. 93x had a "Crash Zone" set up that was no where near a good view (or any) of the track, and they wanted $15 to get in and have the privilege of buying a beer and watching the event on a big screen. Lame. Another down side was the lagging in action at times. When they only send down 4 people at a time, sometimes 2 people would finish, and then you are just waiting for the rest. They should send down at least 8 people pre heat.

Overall, I am very happy to say that I can check that event of my to do list. The Red Bull events all ways seem to be pretty awesome. If you want to look at more photos I shot that day, check out my photography blog Capturing Minnesota

http://capturingminnesota.wordpress.com/2012/01/16/the-red-bull-crashed-ice-event-in-st-paul-mn/
Posted by Nickolay at 8:52 AM

We got there super early, so we got a prime spot towards the finish line right on the wall.
Orlando Vending Machines 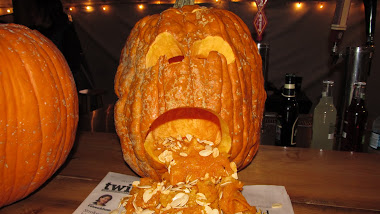 Get this widget at RealtyPin.com